It was like getting to know the population she already knew all over again. New energy. Time to talk to them in-depth! Room for nuance! Those are but a few of the things that were highlights for Susannah Koppejan when she interviewed people for HAIRE. We asked her all about her work for and experiences with HAIRE.

The interviews are the perfect excuse to have a deeper or more intimate contact with someone for once. It feels super luxurious to have the time to talk to someone for two hours on end, because we live in a time when everything should, basically, always be done faster and faster.

Susannah Koppejan works for SMWO (Stichting maatschappelijk Werk en Welzijn Oosterschelderegio – Foundation for social work and welfare in the Oosterschelde region) as Welfare worker and elderly worker. Her main focus is on elderly people who still live at home. In practice, she is a key player in ‘her’ district in the town of Goes. It is her job to pick up signals so that action can be undertaken and she is constantly busy making connections. Between care organisations and people; but her network also stretches to churches, schools and (sport) clubs. Just like her colleagues, Susannah has participated in HAIRE through SMWO by conducting interviews. She gets quite enthusiastic when talking about the work she has done for HAIRE.

“In my line of work, I’m always trying to make connections. When I pick up signals, I look for ways to act upon them. It can be something relatively small. I introduce someone who would really like to go for a bike ride again to a cycling club, for instance. But I also actively promote connections between all kinds of parties like schools, clubs, churches… And this goes further than individual cases, of course. I also look into what can be done within the district as a whole.

We do everything we can to be available and visible for the elderly if they need contact. We drive around on freight bicycles through the neighbourhood and we have set contact places and contact moments, such as consultation hours. And sometimes we get a call from a third party that is worried. In those cases, I also try and make contact. That is how I met an elderly couple of 94 and 96 years old the other day. They live two floors up, almost entirely self-sufficient, with only some aid in housekeeping.

Getting to know HAIRE

I first heard about HAIRE from my team leader. I had gathered that it was some kind of research into loneliness amongst the elderly in which SMWO could participate. It is a theme we are very much involved in. We are looking for tools to deal with it and we also wonder how we can make it something that can be discussed more easily. So, I started out open and interested. We got to know the Solidarity University’s Petra de Braal and Kim Boes as well as Marjan de Smit who works for GGD Zeeland (Regional Health Service Zeeland). They gave a presentation on what they do, what HAIRE entailed and how SMWO might contribute to the research.

What really stood out to me, was that the project was a joint exploration from the start. It was not like everything was set in stone beforehand. During the process, we discovered together what our role could be and what kind of project it was. They were highly interested in what we could do and the direction the research took was (partly) based on that. They wanted to join in with what we already do and not burden us with heaps of extra work. They wanted to work in a way that would be beneficial to both parties. It is an ambitious project, but the aim is not too high because we talked things through.

I conduct interviews on loneliness for HAIRE. I approach a wide range of target groups. I talk to vigorous elderly people, but also more vulnerable people. They are often people I already know, or people I would like to get to know better. All in all, I’m with those people for two hours and conducting the interviews is quite strenuous. So, it is something they should be up to – that is an important criterion. One time, I sat with someone who took the conversation in an entirely different direction. That kind of thing can happen. There is a human factor to the work and he simply needed that different kind of conversation at that moment. So, that wasn’t a problem, really. And in almost all other cases, the interviews provide lots of information that can be used for HAIRE.

Both the Solidarity University and SWMO profit from the project. It takes up quite some time: you have a conversation for two hours and then you still have to write it out. But at the same time, it is the perfect means for me to enter into deeper conversations with inhabitants of the neighbourhoods. Usually, you don’t tackle tough subjects, such as loneliness, so easily. But due to the interview setting, you get from trivialities to quite personal questions in a very short time. That in itself is already highly valuable – you hear really special and beautiful things. But it also provides me with the opportunity to connect. Someone who was, basically, an acquaintance becomes one of my ‘connections’ thanks to the interview. And I may need those kinds of contacts at a later stage when I want to instigate something in the neighbourhood. So, there is a double advantage to it.

The interviews are the perfect excuse to have a deeper or more intimate contact with someone for once. It feels super luxurious to have the time to talk to someone for two hours on end, because we live in a time when everything should, basically, always be done faster and faster. 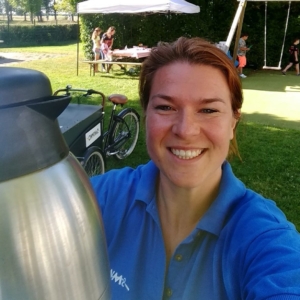 The outcome of the conversations often confirms the ideas I already have on loneliness in the neighbourhood. You can sense in some inhabitants that they are lonely. Those are signals that you ‘pick up’ without it being literally told. When I conduct HAIRE interviews there is an actual question: “Do you feel lonely?”. Up to now, the answer has always met my expectations. Funny detail, however: follow-up questions such as “Do you ever feel isolated?” or “Do you feel connected to people?” can have surprising responses. To me that makes it clear that the phrase ‘loneliness’ does not mean ‘isolated’, ‘without connections’ or ‘without contacts’ to everyone. My point of view is enriched and gains nuance thanks to the conversations. And every now and then you get a very nice surprise. For instance, when you speak to an inhabitant with a lot of baggage, but now get to hear the entire story behind all that baggage. When you find out what someone like that has gone through and you start to realise how much they have already grown and developed … Well, a person like that gains my respect all over again. Twice! It changes the individual in question from a person that you put a lot of energy into, into a person that gives you energy. That is really beautiful!”